"Change is in the air", is an apt way to put it. Those clouds have been lingering over the city of Chennai and the state for a little over a year now. Practically, for those who are thinking about change, there hasn't been a way for them to be actively involved - beyond the volunteering efforts that we all dive right into when the city or state calls us towards.


The assumption amongst the youth and the educated middle class, who can bring about systemic change, is that one must either contest in the position of an MLA/MP or be a chief minister of a state to bring about real change. Yes, those are positions of influence, but for those of us who want to empower ourselves with the badge of government and accelerate change, there are more practical and feasible ways to do so.


One way: Contesting and taking on roles in the Local bodies.


While state level schemes are rolled out from the CM's office, where one can make a lot of difference is at the ward level where there are but 10,000 - 20,000 people whose lives you can directly impact, and be their representative. For those who are new to the political arena, it is also a great way to get your feet wet and to understand how to work with the government in making things happen for the people that you represent before you think about more ambitious goals. A ward councilor represents the interest of 10,000 - 20,000 people whereas an MLA approximately represents the interests of 3 Lakh people. And an MP of approximately 30 Lakh people. It falls on the shoulders of the CM to burden the aspirations, grievances, and governance of 77 crore people - that job requires some training, to say the least.


For those of us in Chennai, the 200 wards that make up the City of Chennai, might be a great start - and could be a starting point where the educated, well-intentioned representatives who could put the interests of the people ahead of themselves can contest.


So where does one start:


2. Nominations are already open and elections are to be conducted before April 30th. So get to know the ward # where you reside in, and put together a team. Talk to the auto guys, the shopkeepers, and others in your flats, apartments and see if you can represent their interests.


3. This position - ward councilor, deputy mayor, mayor etc is not a paid post. So figure out a source of income - either through agricultural land, rent or some other means that will sustain you through the five years of this posting.


If you would like to get more help, We the 5th Pillar along with the Chennai Tricolor Initiative, are doing a workshop on March 12th, in Chennai. You can find the Facebook event for the same here: https://www.facebook.com/events/1648138935491255/ - you can register as a participant by filling the form at
www.chennaitricolor.in/workshop


While there is a rally usually for MLA and MP elections - because it has an implication on the CM and MP respectively, local body elections are rarely campaigned for - and the middle class and those of us who
aspire for a better city, are seldom represented (polling rates are roughly 50-60%).


We have a chance to step in and make a difference. Will we go beyond mere words and facebook statuses this time?


In case of any queries, feel free to reach out to us.

Can Money be Black?

We are trying sailing in a small water tank, wondering why we aren't moving forward!  Why are we in Denial?

Let's end corruption today! Encourage enable and Empower every citizen of India to eliminate corruption at all levels of the society.

Encroachment? Be firm; don't give up!

Mr. Velusamy Narasimanaicken Palayam in Coimbatore-TN, noticed that his neighbor​ Rani Selvaraj had encroached a piece of corporation land and built a fence around it. Velusamy filed a Right To Information(RTI) petition to PIO of respective Taluk office with help of 5th Pillar, Coimbatore Chapter. He got a reply for the RTI but no action was taken.

Then he filed 1st appeal to the Appellate authority of the Taluk office; he got the reply and the officers promptly came and measured the land , confirmed that it was Corporation land and notice was served to Rani Selvaraj to remove the encroachment. She ignored the notice, so Mr. Velusamy filed a complaint with the information commission, after which the officers sent another notice to the encroacher; this time she removed the fence around the Corporation land and it became free from her encroachment.

Got the Land Title after 40 Years. 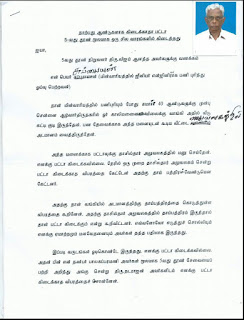 Subbian, Retired Junior Engineer from Electricity Board applied for his land title 40 years ago, the Thasildar refused to give him the title without the parent document for the land. He did not have the parent document. A few weeks ago he contacted 5th Pillar and the received his Patta without having to submit the Parent document, turns out they the applicant is not obligated to have a copy of the parent document, they were able to locate a copy in the office with only the Encumbrance Certificate. 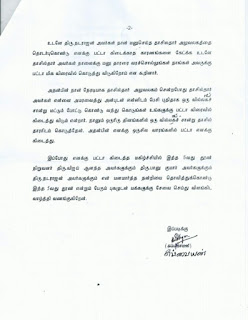 Padmini was trying to get hold of the Resurvey settlement Register [RSR] / Survey Land Register [SLR] document to locate her land for the past 4 years. 5th Pillar's member Raja who had once received 5th Pillar help filed a Right To information petition to the Taluk office after taking 5th pillar's RTI coordinator's advice on 3- 10 - 2016. On 19-10-2016  they received the documents.