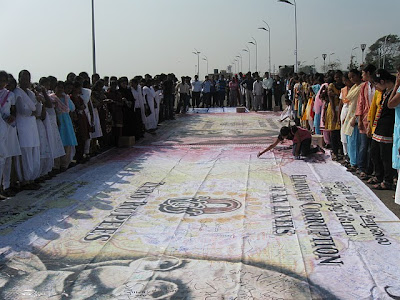 On January 23rd, 2010 5th Pillar conducted a Human Chain with the theme “Hug Honesty, Kick Corruption”. The objective of the human chain was to campaign against corruption and appeal to save the RTI Act. The event was attended by students from various colleges all over Chennai and also included 5th Pillar coordinators, members and the general public. It started at 9:00 am at Marina Beach in Chennai.
Dr. Ln G. Manilal, district Chairman of Lions Club, kicked off the event by signing on 5th Pillar’s mega sized(30 feet long) Zero Rupee Note Banner, bearing the statement “I will neither accept nor give bribe”. Then the remaining public signed on the banner with great zeal, as a token of their dedication against corruption. “We have mainly targeted college students as they are the future citizens of the country. Some of them who get into politics will have the values of “the greater common good” imbibed in them and help India get better by the day”- said Mr. K Nagarajan, the legal advisor of 5th Pillar.
To further their appeal for a corruption free society, they laid thumb impressions to justify the slogan- “Without ‘I’ there is no Corruption” and “Hug Honesty & Kick Corruption”. A signature campaign made on a larger version(9ft x 6ft) letterhead of 5th Pillar, signed by all the students appealed to the Chief Minister and the Deputy Chief Minister of Tamil Nadu to enforce stricter punishments for corrupt officials and to save the RTI Act from losing its power by poor functioning of the State Information Commission.
The Zero Rupee Note has proved to be the mascot of 5th Pillar, and helped many a citizen to obtain his/her fundamental right or a certificate from a government department, without having to pay a bribe or wait inordinately. Hundreds of Zero Rupee Notes were distributed to all the students who were seen holding them high and taking the Anti-Corruption Pledge that they would “Neither Accept Nor Pay Bribe”, and would help every fellow citizen to “Eliminate Corruption from All Levels of the Society”.
The organizers of the event Mr. Vijay Anand, the President of 5th Pillar;
Mr. R. V. Nambi, Director of Vigilance and Anti Corruption; Mr. K Natarajan, Senior Advisor; Mr. K Banu, Executive Director; Mr. S. Nagarajan, Legal Advisor; Mr. A.Subramani, Director of Operations, and Student Coordinators- Sarath Babu,
Jayaselvan, Dilip Kumar and Jeevan.
“If India had started a war against corruption 40 years back, there won’t be a need to wage a war against terrorism today, because the effects of terrorism are compounded only because of corruption in our government machinery”, said Vijay Anand, “The Human Chain is an attempt to make the corrupt officials realize it is time to stop taking bribes, as citizens of India are starting to be unwilling to be victims of a corrupt system.”
The event was also an act to seek government support to help eradicate corruption from its very roots.
Posted by 5th Pillar at 3:39 PM

Email ThisBlogThis!Share to TwitterShare to FacebookShare to Pinterest
Labels: Chain for a CHANGE

Having such an event in the Marina Beach is definitely a good idea. Good to know that they've considered that.