Corruption in Foodgrain storage and distribution 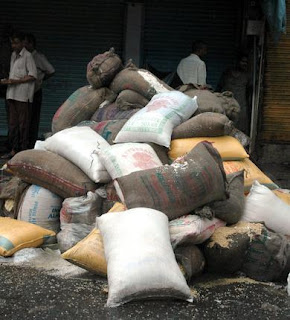 Corruption has rocketed in all sectors, but its effect in the food grain sector affects all especially the poor. A recent observation of the Supreme Court, highlights the prevalent corrupt practices in the foodgrain storage facility. Due to the negligence of bureaucrats and responsible officials, every year tonnes of foodgrains go to waste due to improper storage facility. No one is accountable for this sorry state. In the same country we see people starving and begging for few kernels of rice for survival,eating rats for survival and we see tonnes of rice going to waste.

Earlier we had reported of corruptive practices in food procurement agency in Thanjavur District were the poor farmers are taxed for their hard earned crop. They are paid Rs.10 less for each bag of rice. When the rice is transported from this society to the storage facility there is lot of discrepancies were they loose some bags. At the storage facility there is different scenario and loss of bags. When the rice is distributed through PDS we hear stories of very poor quality rice being replaced instead of the regular variety. Miscreants replace the good variety rice with the inferior quality, and the people who are really affected by all this are the poor who solely depend on this rice. It is so unfortunate that even if there are governmental policies for the poor they never benefit due to these intermediary corrupt officials. Apart from this we see corruption in the Ration store where the poor go to buy their alloted measure of essential commodities. Most of the time they are denied saying that they have not received stock and the items are sold for stores.

When we see bags of rice being left to rot like seen in the above picture, whereas kids waiting in line for food and malnourished children we see how unfair and imbalanced our society is. Why is it, that there is no sense of empathy in our society. Everyday we hear stories of black money being stashed in offshore accounts and we see poor dying for lack of nourishment. We need sincere officials in all civil service who can work cohesively, complementing one another in maintaining a strong corrupt free society.
Posted by 5th Pillar at 1:12 PM

I think this is just the very least of the problems one encounters in third world countries, which is improper storage of food grains. I think the main problem is the inefficiency of distribution of such, and this is where the resolution should start. Storage problems could make such worse, but it may not be the main problem at all.