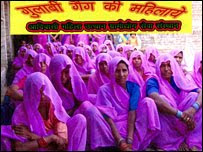 As I was browsing the web, I came across a very interesting old article in BBC dated in 2007, titled “India's pink vigilante women”. Several hundred vigilante women in the Banda region of Uttar Pradesh identifying themselves by wearing a pink Saree and calling themselves the “gulabi gang”, go after corrupt officials and boorish men with sticks and axes. The leader of the organization, Sampat Pal Devi was married at a very young at the age of 9 and went to live with her husband at 12 and had her first child at 13. Witnessing the misery and discrimination in a land of poverty, casteism and male chauvinism, motivated her to form a group to fend for themselves as they were neglected by all. In a region of male domination she formed an organization of women with similar ideologies and unearthed many corruptive practices and thrashed many officials. 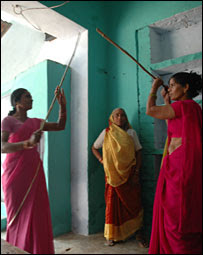 In one instance, when the police authority arrested a lower caste man and kept him in the cell without filing an FIR( First Information Report), the gulabi gang raided the police station and attacked the policeman. Sampat Pal Devi had also taken another step forward and had contested in the local election and secured 2800 votes. We have to laud the tenacity of this person who had the zeal and courage to make a difference in the society. She did not shy away from politics, in-fact she gave it her best shot as she believed that she can bring a change in the system by being in the system.
When a group of women from poverty ridden society who lack proper education can form a group to tackle corruption, we should be able to take a stand against this social evil by standing our ground by denying to pay bribe and try to bring the wrongdoers to justice.
Posted by 5th Pillar at 12:13 AM