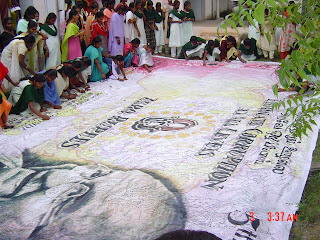 “If we don’t eradicate corruption; corruption will eradicate us. We will have to unite to work against bribery and corruption”, said Mr.Vijay Anand, President of 5th Pillar, when he addressed the Sourashtra College students in Madurai on 17th August, 2010 during the, “Freedom from Corruption” campaign . He first spoke at Sourashtra Men's college, and in the afternoon spoke at Sourashtra Women's college, where he emphasized the importance of the role of students in eliminating corruption as todays students are future leaders, government officials, entrepreneurs and policy makers who can definitely turn around the social scenario by adhering to anti-corruption movement. He spoke about the Zero Rupee Note a novice tool adopted by our organization to empower the public against corruption. The impact of distributing the Zero Rupee Note in real life scenarios and the impact it created on the officials with examples was highlighted by Mr. Anand. He also spoke about the RTI Act, its implementation and successes achieved. His examples of the RTI petitions filed by our organization and the resulting success was a clear demonstration of the effectiveness of the Act. Students took an oath with the Zero Rupee Note, to neither accept nor give bribe, and signed on the 30 x 15 feet Zero Rupee banner to show their solidarity against Corruption.
View Gallery - Sourashtra MEN'S COLLEGE
View Gallery - Sourashtra WOMEN'S COLLEGE
Posted by 5th Pillar at 10:43 PM

Email ThisBlogThis!Share to TwitterShare to FacebookShare to Pinterest
Labels: Freedom From Corruption Campaign