Updates from the RTI Awareness Camp @Dharmapuri on 18th September 2010 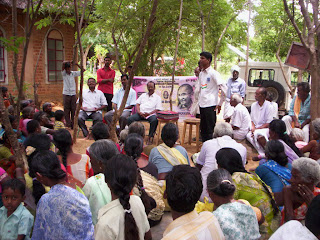 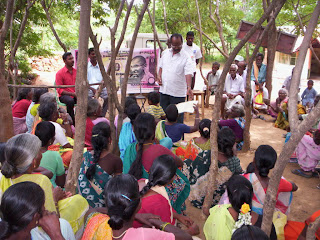 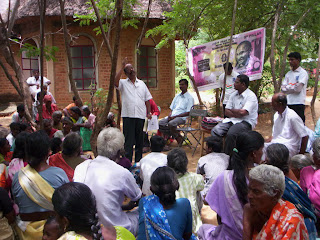 The RTI brought to limelight tonnage of bribe demands by the village administration besides the stiff silence that was prevailing over the petitions submitted to the collectorate over the said issues. More than 150 people from the surrounding villages of Nagarkoodal, Kalanikatoor, Balajangamanahalli and a few more participated in the camp. Owing to the intensity of the issue we had a grievance camp scheduled the nest day in the same campus. About 8 school teachers and 10 volunteers helped us in organizing the camp. The various petitions that were received were in the following categories:
1. Patta problems
2. Ration card, civil supplies issues ( Name inclusions / Deletions / New and Missed cards)
3. Electoral Identification problems
4. Old Age Pension issues
5. Widow Certificate Disbursal Delays 6. Birth/ Death certificate problems

The current action item is to re-request for a fresh RTI with the collectorate based on the above petitions through registered post with the concerned departments.
Posted by 5th Pillar at 6:14 PM